Here’s a presentation by Lufthansa to the National Transportation Safety Board (NTSB) on their ab initio (from the beginning) pilot training syllabus. Some thoughts on this: 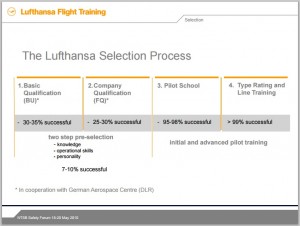 Slide 6 depicts the Lufthansa pilot selection process. What is striking about this graphic is the 95-98% success rate in step 3, “pilot school,” (aka flight school.) This is a dramatically high number.

Compare this with the attrition rate in Navy flight school during the period 1989-1992 (see page 20 – I graduated Navy flight school in 1989, so this data concerns the flight training I remember.) The difference is striking: leaving out ground school (“AOCS” and “API”) and pipeline training, the “success rate” 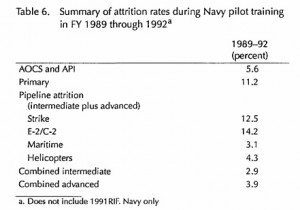 was 88.8%, even though Navy primary flight training had a smaller scope than the Lufthansa training (designed to prepare a pilot to fly as second-in-command of an airliner.)

The “weeding out” process in the European system (I’ll repeat the assumption: Lufthansa’s method typifies the whole European system) happens during Basic Qualification and Company Qualification (between 25-35% successful). In other words, unreliable pilots are removed from their pipeline primarily during a non-flying portion of their syllabus.

In the American system, unreliable (or, indeed, unlucky) pilots are more often weeded out while flying. I realize this sounds less civilized (i.e. a pilot removing himself via mishap.) Nobody thinks that weeding out by mishap is a good thing. But it’s not the only way pilots fail to complete their training.

Maybe the European system is better for that reason; recent events might only be highlighting the fact that, given a much smaller pool of general aviation or military pilots, the Europeans are doing a bang-up job screening out unreliable pilots.

But in America we have yet to see anything like Germanwings.