In this blog post I discussed the amazingly low attrition rate of Lufthansa’s ab initio (from the beginning) pilot training program. 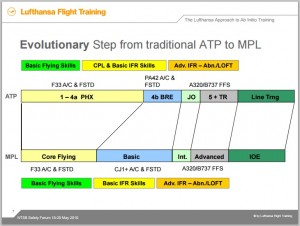 In other words, at U.S.-based airlines, a First Officer is a Captain who is waiting to upgrade (this is another reason why the media’s habit of referring to the Captain as “the pilot” and to the First Officer as “the co-pilot” is so aggravating to actual pilots.)

Lufthansa’s presentation to the NTSB (at left) graphically shows how things have changed with the introduction of the MPL license: you can see how the basic flying skills phase of the syllabus (the part done in an actual aircraft) has been de-emphasized.

The MPL program is almost a wholesale change to the way airline pilots are trained. Here is a good discussion of the pluses and minuses of the program from the point of view of Europeans seven years after the introduction of the MPL. Summary:

To this pilot, the worst aspects of the MPL program are that its graduates are not taught to think like Captains, and the risibly low amount of aircraft flight time, landings (as low as six) and upset recovery training (to Lufthansa’s credit, they actually incorporate upset recovery training, but many do not.) The bottom line: there are no MPL graduates flying as Captains anywhere. What will happen if/when an MPL grad, lacking the seasoning of a military- or civilian-bred ATP license holder, bids a Captain’s seat at his airline, goes through 6 weeks of (simulator only) Captain training, and then flies with another MPL co-pilot at the controls of an airliner? You will then have an actual innovation in airline staffing: no Captain in the cockpit.